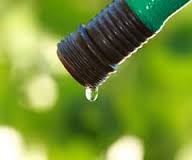 The city’s public works department has compiled data regarding our usage for the 2014 irrigation season. Usage during May, June, and July 2014, was typical; significantly higher than the state recommended amounts. July usage of 175,465,967 gallons was nearly double the state recommended amount of 88,125,100 gallons. This usage occurred during a July when precipitation was slightly above average of 0.61 inches per month versus actual rainfall of 0.68 inches per month. Substantial above-average precipitation moved into the area late July through August and into September, reducing the need to irrigate.

During significant rain events, flows from storm water inlets drain into our ponds and feed into our systems. This unmetered water is not accounted for in the total consumptive use. The July report estimated that one large rain event added approximately 7 million gallons of water to the storage ponds. Due to the increased and stronger precipitation events, much of the usage difference could be from unmetered water being used and not accounted for.

Concerted efforts helped the city finish the 2014 irrigation season marginally better, by using 114,800,261 gallons less than the 2013 season. This is approximately a 13% reduction, excluding unaccounted inflows as stated above. This is far from our goal of 50% and only a small part of our total goal of matching the state recommended amount. As we review our usage and evaluate methods to further reduce consumption, we recognize that our initial efforts were positive. More information regarding water conservation and irrigation use will be presented online and in next month’s newsletter.