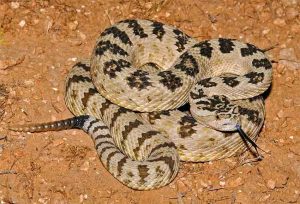 Give snakes you meet on the trail plenty of space.

Rattlesnakes often strike fear in the hearts of people. But they shouldn’t. Knowing a little about the animal, and doing a few simple things — like keeping your distance and not harassing a snake — can go a long way to keeping you safe.

If you see a rattlesnake, give it plenty of space. And don’t harass it.

Kevin Wheeler, biologist with the Division of Wildlife Resources, says rattlesnakes in Utah are on the move right now, looking for water and rodents after emerging from their dens in May.

So, if you see a rattlesnake in the wild, what should you do?

“Don’t approach it,” Wheeler says. “Give it plenty of space, and leave it alone. Respect the snake, and it will respect you.”

Wheeler says most people who are bit by rattlesnakes are bit while harassing or toying with a snake, or trying to kill it. Like most animals, rattlesnakes fear humans and will do anything they can to avoid us. “That changes if a snake thinks it’s threatened and there’s no way to escape,” he says. “In that case, the snake will often strike to protect itself.”

Respecting the snake, and giving it plenty of space, are the keys to avoiding problems.

As you’re hiking in Utah this summer, watch the trail ahead of you, and check carefully before stepping over rocks, reaching onto ledges or sitting down on a rock or log. If you see a rattlesnake, Wheeler recommends the following:

Rocky, talus slopes are the places in Utah where you’ll most likely encounter rattlesnakes. In fact, Wheeler says there’s a good chance you’ve been close to a snake while hiking and never knew it. “A snake’s camouflage allows it to blend into its surroundings,” he says. “They’re tough to see.”

Wheeler says rattlesnakes are fully protected by Utah law; it’s illegal to harass or kill one. “Rattlesnakes are an important part of Utah’s ecosystem,” Wheeler says. “They help keep the rodent population in check. And that helps keep the diseases rodents carry in check too.”

KEEPING SNAKES OUT OF YOUR YARD

Rocky, talus slopes aren’t the only place in Utah where you might encounter a rattlesnake. Depending on where you live, you could find a snake in your yard.

Aside from building a fence that rattlesnakes can’t penetrate, Wheeler says the following are the best ways to keep rattlesnakes out of your yard:

For more information, call the nearest Division of Wildlife Resources office or the DWR’s Salt Lake City office at 801-538-4700.