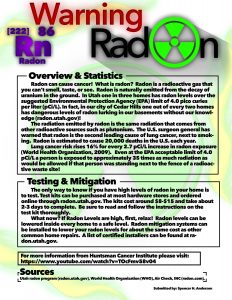 What is radon? Radon is a radioactive gas that you can’t smell, taste, or see. Radon is naturally emitted from the decay of uranium in the ground. The U.S. Surgeon General has warned that radon is the second leading cause of lung cancer, next to smoking.

In Utah, one in three homes may have radon levels over the suggested Environmental Protection Agency (EPA) limit of 4.0 pico curies per liter (pCi/L). In fact, in the City of Cedar Hills, one out of every two homes may have dangerous levels of radon lurking in our basements without our knowledge (radon.utah.gov). The radiation emitted by radon is the same radiation that comes from other radioactive sources such as plutonium.

Radon is estimated to cause 20,000 deaths in the U.S. each year. Lung cancer risk rises 16% for every 2.7 pCi/L increase in radon exposure (World Health Organization, 2009). Even at the EPA acceptable limit of 4.0 pCi/L, a person is exposed to approximately 35 times as much radiation as would be allowed if that person was standing next to the fence of a radioactive waste site!

The only way to know if you have high levels of radon in your home is to test. Test kits can be purchased at most hardware stores or ordered online through radon.utah.gov. The kits cost around $8-$15 and take about two to three days to complete the test. Be sure to read and follow the instructions on the test kit thoroughly.

What now? If radon levels are high, first, relax! Radon levels can be lowered inside every home to a safe level. Radon mitigation systems can be installed for about the same cost as other common home repairs. A list of certified installers can be found at radon.utah.gov. For more information from the Huntsman Cancer Institute please visit: healthcare.utah.edu/huntsmancancerinstitute and search “radon.” 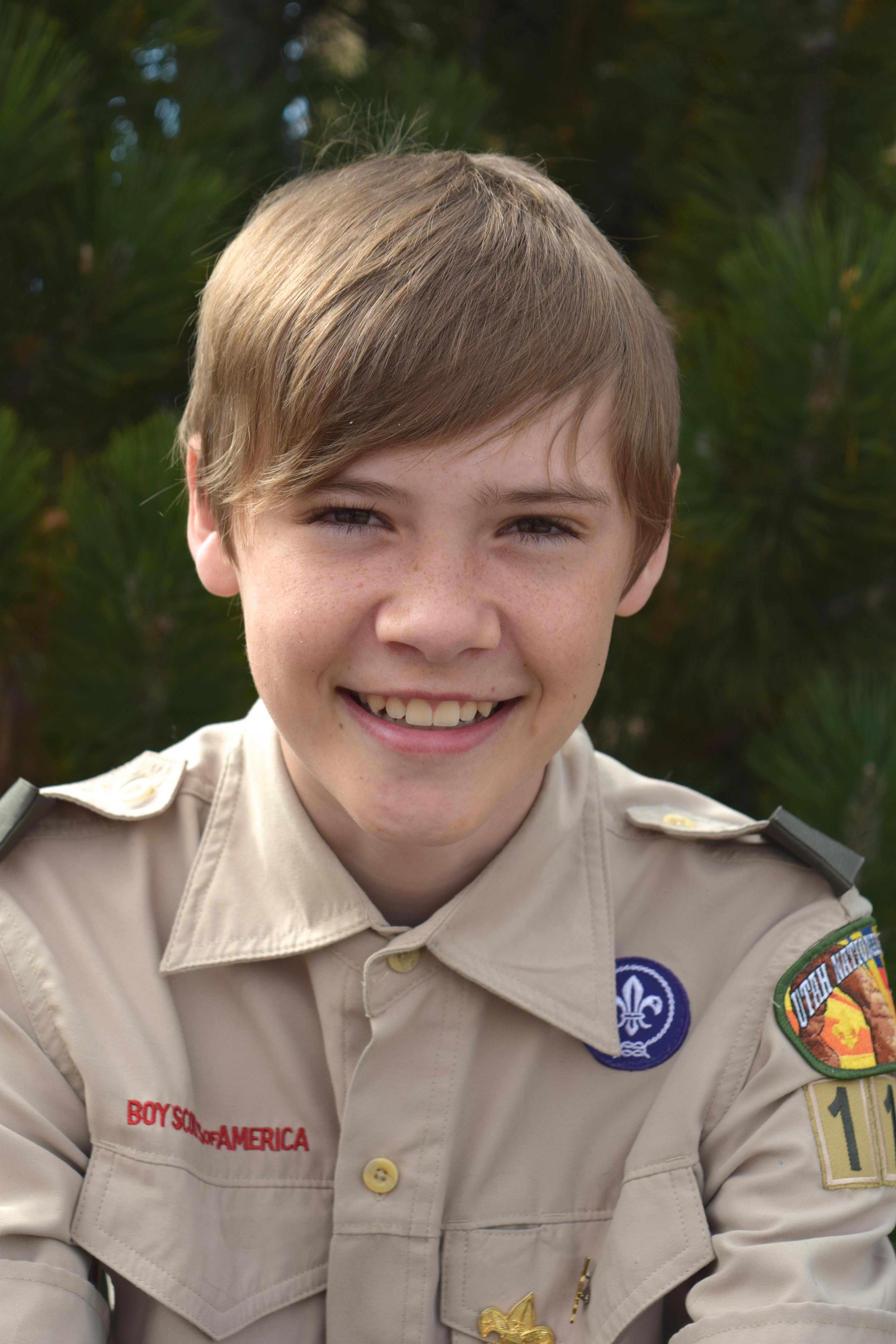 Spencer Anderson is an Eagle Scout candidate who has lived in Cedar Hills since 2002 when he was only two months old. When he started thinking about his Eagle project he decided he wanted to do something with what he likes best: graphics. Then he thought of a pamphlet or flier and started looking for things that would help others. He got the idea of a radon awareness project when he overheard his parents talking about radon and how it is a leading cause of lung cancer, second only to smoking.

The Andersons had tested their home a few years before and found that their radon level was very high. They had a radon mitigation system placed in their home that had dropped the radon levels well below the danger levels that the EPA has set.

So Spencer started to plan. He explains: “At first I wanted a place in the city newsletter that would inform residents of the dangers of radon gas. After turning my flier in to the city they decided to put it on the city website as part of a permanent radon information page. I have researched and talked with experts about radon and am honored that the city would want to use my project as an informational tool to help keep fellow residents from future harm.”

He continues: “Early detection is very important in the fight against cancer and we should all be aware of our physical conditions. However, I think prevention, whenever possible, is a much better option. It is my hope that all of the residents in Cedar Hills will have their homes tested and those who have high levels of radon will mitigate their homes. Hopefully, we can prevent lung cancer caused by radon.”