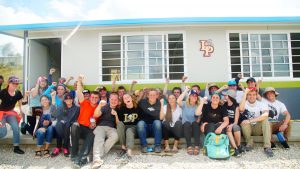 Each year, students at Lone Peak High School organize and participate in a school and community service effort called Gold Rush, which raises funds for charitable service projects. A non-profit organization is then selected to benefit from the money raised by the students and the community. Gold Rush is a time when the students at the school focus on service.

Lone Peak’s SkillsUSA Club recently announced this year’s humanitarian project: “Three Weeks, Two Schools, Become One.” In the span of only three weeks enough funds were raised to help build two schools in Chiapas, Mexico. Through these efforts, Lone Peak students were able to help change the lives of the children in that area.

The school partnered with the Escalera Foundation, an organization on a mission to end the world school shortage. The schools were built during the week of March 6, 2016, in San Pedro Pedrenal, a small village at the southern end of Mexico, where most people are subsistence farmers, and where many of the children do not have easy access to schools, often traveling up to two hours every day to attend school. The schools there were small shacks made of 4x4s and tin roofs, and classes were often canceled due to poor weather conditions. The new, functional and resourceful schools will increase the chances for children and youth in San Pedrenal to have better educational experiences, leading to better lives.

The SkillsUSA Club members involved in this project were: Nate Wiscombe and Alexis Osmond of Cedar Hills, and Emily Hill of Alpine. The club adviser was Dustin Topham. SkillsUSA enhances the lives and careers of students and instructors as they strive to be champions at work.