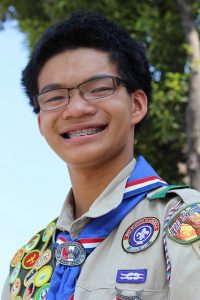 It takes a certain amount of dedication, time, effort and support to achieve the rank of Eagle Scout. Among other requirements and projects, It takes a minimum of 21 merit badges to earn Scouting’s highest rank. Now imagine duplicating that time and effort by six, plus add on all the Cub Scout ranks and awards and what you have is one dedicated Scout.

Eagle Scout Joseph Chou, age 17, from Cedar Hills, UT is just one of those Scouts. He earned all 141 merit badges as well as all of the Cub Scout awards at the time. There will be a special Court of Honor for his accomplishment Saturday, Aug 29, 7 pm at the LDS chapel at Chesterfield Drive, Cedar Hills, UT.

From cooking to sailing, Joseph said it was hard to choose from a pool of 141 which merit badges were his favorite, but a couple of his favorite were aviation, nuclear science, animation, inventing, and game design.

“My favorite out of those would be animation because it was my very last merit badge,” Joseph said. “and because I like seeing 3D animation done well, mainly in CGI movies.”

Considering how many badges Joseph earned, it might be surprising to learn that he is the first Scout in his family. His parents are immigrants and, while they didn’t know a lot about Scouting at first, learned the program through Joseph.

“We were just hoping he could get his eagle, and didn’t imagine he would get all the merit badges available,” Joseph’s dad, Felipe Chou said.

Especially with Cub Scouting, Joseph’s parents did a lot to help him, but as he grew he became more motivated to do it himself, printing out his own worksheets and driving himself to meet the various merit badges counselors. But what his parents did offer was lots of encouragement and the occasional reward for his hard work.

“We asked his Scout and youth leaders and others to encourage him along the way,” Felipe said. “We reminded him of his commitment that he made to himself to take on this challenge, and to persevere and see it through.”

Maintaining the motivation to earn all the merit badges wasn’t always easy, at times Joseph felt like quitting, but last year he realized he only had 13 merit badges left and decided to keep going.

“I saw how close I was and I guess that I just muscled through it,” Joseph said.

Sometimes it was the difficulty of the merit badges themselves that made it harder for Joseph to complete his goal. The most difficult merit badges for him were bugling, scuba diving, and water sports.

“I am not a natural swimmer, so water merit badges were harder for me, ” he said.

Joseph’s parents do not swim, so he had to rely on his Scout leaders and counselors for help. Many times this required Joseph to try again and again while others in the troop had already passed. As for bugling, while Joseph has excellent musical talent, the bugle is very different from a violin.

“Seeing him struggle with several merit badges was hard for us to see as parents, but when he finally got it, we were elated because we knew how much work he put into it to accomplish each one,” Felipe said.

Aside from skills from merit badges Joseph feels he learned a lot from Scouting, the most important being how to serve and become an effective leader.

“Merit badges helped me because some of them taught me how to serve,” Joseph said. “Serving is part of the Scout Oath, and since we recite that often, it means we should keep to it.”

John Harrison, Joseph’s Scout leader in Crew 942, has always been impressed with Joseph’s tremendous initiative, commitment and discipline; especially in the ways he applies the Scout Oath and Law into his daily life.

Besides just Scouting accomplishments Joseph is overall involved at church, in his community and his school. He is a great pianist and violinist, and plays with the Best in State youth orchestra, Lyceum Philharmonic Orchestra. He will also finish his senior year of high school with an associate degree through Utah County Academy of Sciences. After he completes his associate degree, Joseph wants to serve as an missionary for The Church of Jesus Christ of Latter-day Saints, then return to continue his college degree.

“Joseph is modest, eager to try new things, and fun,” Harrison said. “He sets a tremendous example for the rest of the young men in our group and is a great example of the ideals of Scouting.”